​The Arts at NCDD Events

Art can be a powerful catalyst for dialogue. Through our various experiments with the arts at our national conferences, NCDD has found that the arts can take people to deeper levels of thinking and feeling, much faster. Through creative use of the arts, you can bring much-needed humor to serious issues, provide a new doorway to enter into a conversation about troubling topics, and lend a personal and human dimension to abstract social issues. (See our “Arts-Based Civic Dialogue” resources for many examples!)

At our events, we’ve used music, slam poetry, theatre, drawing, collage, and of course graphic recording to give participants different ways to consider conference content and interact with fellow participants.

Here’s an overview of some of the arts featured at NCDD’s national conferences. We are grateful to all the graphic recorders, performing artists, musicians, and others who have added meaning and magic to NCDD events through the arts.

Arts at the 2014 Conference in the DC Area

We’ll be sharing a considerable amount of information soon on the incredible work our graphic recorders did during our latest national conference.  In the meantime, check out our NCDD 2014 Storify Page for a sneak peak or read this blog post detailing NCDD’s Field Mapping Project.

Arts at the 2012 Conference in Seattle

The team decided to create a huge mural they would work on together throughout the 3-day conference that reflected what was said and learned on the conference theme, “How can we build a more robust civic infrastructure in our practice, our communities, and our country?” The team not only processed input from the various plenary speakers, but also received a ton of input from participants directly.
During the plenary session on the second day of the conference, volunteers themed input from each table on these three questions: 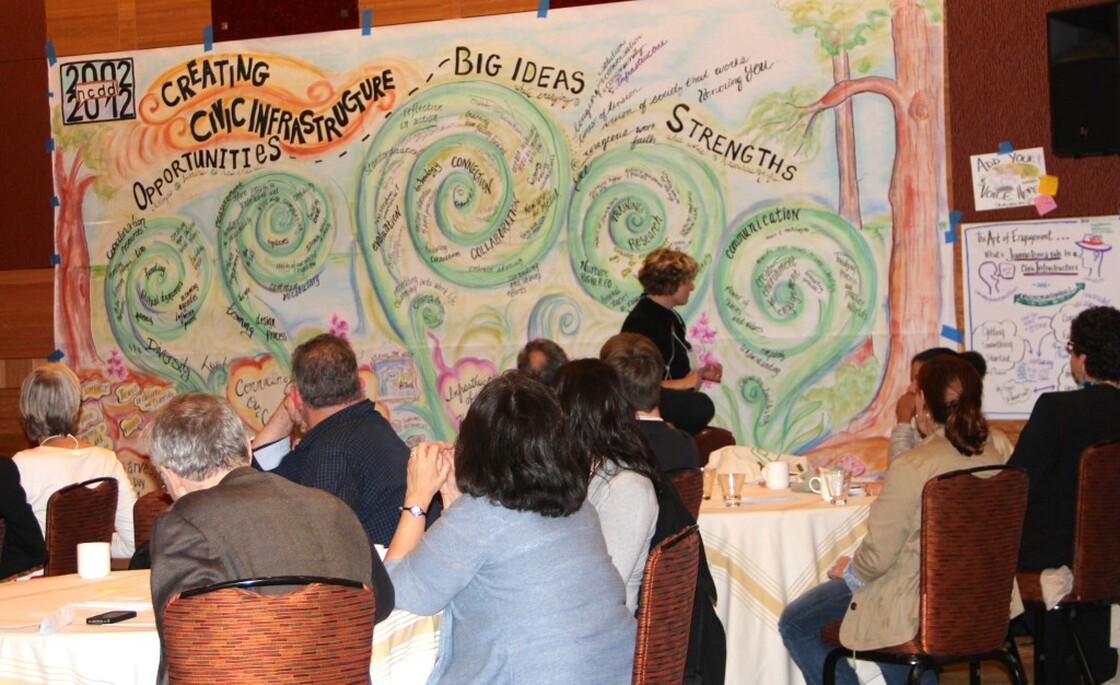 Sahar Driver and Shaady Salehi of Active Voice offered a session titled “Dialogue and Deliberation 3.0: New Platforms for Storytelling as New Opportunities for Dialogue,” which led participants in an exploration of how online events and film “streamings” are a form of storytelling that can deepen in-person dialogue and online conversations.

In addition, we had a highly-rated session titled “Embodied Dialogue: A Social Presencing Theatre Workshop” led by Heidi Madsen of CAW Columbus–Creative Arts of Women and Patricia Kambitsch of Playthink. Heidi and Patricia led an experiential session in which participants explored Social Presencing Theatre, a synthesis between theater, embodied presence, and dialogue which is based on Otto Scharmer’s Theory U.

​Arts at the 2008 Conference in Austin

Musician and educator Eric Haltmeier created an original musical composition featuring audio clips of speakers and attendees at the 2008 conference, which can be heard at http://www.erichaltmeier.com/dialoguesongs.htm. Eric’s piece, which we played during the closing session, served to reflectively represent conference themes in sound. 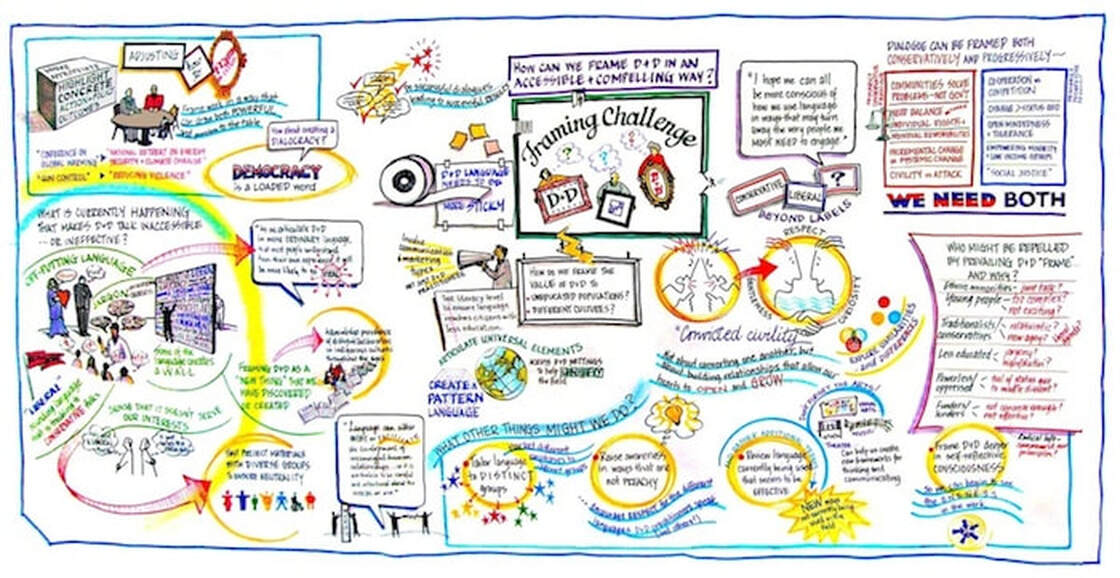 Many more images of the graphic recordings created at NCDD Austin have been uploaded to Flickr by conference participants. Be sure to check them out at www.flickr.com/search/?q=ncdd2008&w=all.

​Arts at the 2006 Conference in San Francisco

Drumming, singing, spoken word, theatre, the visual arts, music, dance, and film all have the ability to deepen our work in dialogue and deliberation. 2006 conference participants were invited to enjoy, engage in, and be inspired by the arts elements of the conference and to think about how the arts might enhance their dialogue work. You will find more details about the following arts-based activities in the 2006 Guidebook.

Our sincere thanks to Leah Lamb, Artistic Director of The Performance Initiative, for coordinating the arts component of the 2006 NCDD conference!

Several arts-focused workshops were offered at the conference. Being in San Francisco – the documentary film capitol of the nation, leaders of the Center for Digital Storytelling shared how their narrative storytelling techniques can be tools for social change. Active Voice also demonstrated their technique for empowering organizations to use film to enhance their work. 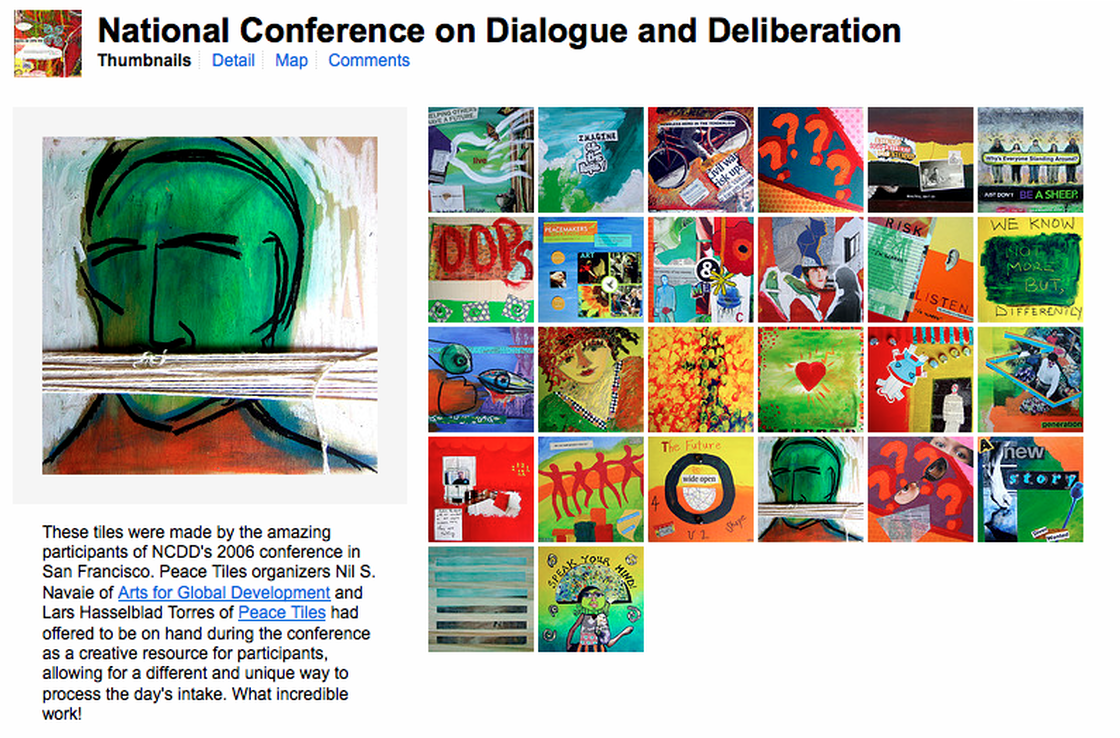 As San Francisco is an epicenter of “spoken word,” two artists of Poets for Global Justice opened our second day together, giving us a sense of place and showcasing the roots of hip hop, where young and old poets alike put words to a rhythm that can be listened to, providing a way for difficult social issues to be voiced. Drew Dellinger is a speaker, writer, teacher and rapper. He is the winner of Common Boundary magazine’s national Green Dove Award for innovative work integrating ecology, psychology and spirituality. As a rapper and lyricist he uses music to address issues of cosmology, justice and ecology. Danielle Drake-Burnette is a writer / spoken word artist, the 2003 Oakland Poetry Slam Champion and was pursuing an MFA in Creative Writing for Poetry at San Francisco State University at the time. Danielle is also the Founder of Creation Cocoon for Girls, an arts education program that teaches girls empowerment through traditional arts. A video showing clips of the two performers at the conference was uploaded to http://blip.tv/file/57783 by one of our attendees.

Unconditional Theatre (www.untheatre.org), led by John Warren, brought to life the themes that emerged as the conference progressed, in the same way they brought voting ballots to life during elections for their local community. Each night of the conference, a group of 12 to 15 volunteer attendees met to share quotes, themes, questions, and challenges they noticed during the day’s plenary sessions, workshops, and hallway conversations. The next morning (on the second and third days of the conference), the volunteers got on stage and acted out the themes and quotes that stood out for them, to tell the story of the day before. Unconditional Theatre explores contemporary issues and events through the actual words, stories, and participation of those involved. By conducting interviews, sharing stories, and facilitating dialogue, they involve communities directly in dramatic work that builds understanding and seeks to inspire social change.

Throughout the conference, participants had the opportunity to connect and create with artists from Illegal Art (www.illegalart.org), who are joining us from New York City. Illegal Art is a collaborative of artists whose goal is to create interactive public art to inspire self-reflection, thought and human connection. Each piece is then presented or distributed in a method in which participation is simple and encouraged. Among other things, Illegal Art will allow conference attendees to contribute to their “Suggestion Box” – a large cardboard box with a slit on the top where people can submit a suggestion about anything they would like to.

The 2006 conference opened with the ceremonial tradition of drumming. The Brazilian drumming ensemble Maracats (pictured above) enticed stragglers into the Parc Ballroom with Samba drumming, and performed songs and chants for Elegua, the Ancient African Deity of the Crossroads – the Opener of Dialogue and Communication! The Maracats perform the cultural traditions of Pernambuco, Brazil, known generally as Maracatu. This highly infectious drum/song/dance tradition combines ancient African roots with modern soulful and funky grooves to produce a compelling contemporary mix. Maracatu, while well known throughout Brazil, is virtually unknown in the U.S.

Arts at the 2004 Conference in Denver

In addition to several exciting arts-based workshops and Monday morning’s plenary session featuring National Playback Theatre, several artists provided artistic notation and graphic recording during the plenary sessions and in some of the workshops. Many more details can be found in the 2004 Conference Report as well as the 2004 Guidebook.

The titles and presenters of the 2004 art-based workshops were:

Elana Stanger (aka St. Anger) joined us again to provide her unique, dialogue-provoking artistic notation services. Elana, an innovative artist from the Bronx and owner of Diversity Arts, created artwork while observing sessions and goings-on at the conference. Her artwork, which revolves around cartoons in which innocent-looking characters talk to one another about sensitive subjects, is designed to raise questions or awareness in the viewer, leading to greater individual clarity and insight, and intergroup understanding.

Arts at the 2002 Conference in Alexandria, Virginia

Due in large part to our collaboration with the Animating Democracy Initiative, NCDD 2002 ended up having a very strong art component which left a strong impression on most participants. Animating Democracy’s day-long meeting held the day before the conference brought a sizable number of talented artists whose work inspires dialogue and deliberation. Some of these artists had applied to present at the conference.

In addition, we were approached by two young, talented artists who provide graphic notation services at conferences and who were especially interested in this conference. And we wisely decided to have artist William Cochran present a slideshow about his unforgettable Community Bridge project during our opening night reception. More details about the arts at the 2002 conference can be found in our 2002 Conference Report.

Five of our most popular break-out sessions were related to the arts. This was the first time many of the dialogue and deliberation practitioners and scholars present had been exposed to some of the possibilities for combining art with D&D, and these sessions were extremely popular and highly praised by those who attended.

The sessions were titled:

One participant made this comment about the Liz Lerman Dance Exchange session:

​I was brain dead with exhaustion from the adrenalin put out at my own workshop and the listening focus of the prior workshop. This woke me up and got my attention! You didn’t realize until the very end how far you had gone both in deepening your connection with yourself and working in interesting ways with others.
Because of these sessions, more D&D practitioners now know that combining the imaginative power of art with the transformative power of dialogue creates dramatic possibilities for communication and connection. Integrating the arts into our work also obtains and holds the interest of some people who might otherwise be uninterested in dialogue and deliberation. The D&D community now knows the importance of examining this question posed by the Animating Democracy Initiative: How can the arts and humanities contribute most potently to civic dialogue and broader civic discourse?

A Special Presentation on The Community Bridge

During our Friday evening reception, artist William Cochran shared with us the inspiring story of the Community Bridge and the divided community that came together to build a lasting bridge. Frederick, Maryland’s Community Bridge is an extraordinary public artwork whose meaning and content was created through a two-year artistic interaction with thousands of people of all ages and backgrounds. This large-scale collaboration charged the bridge with such meaning that those who see it and hear its stories often report that it changes the way they look at the world; it certainly seemed to impact many people’s thoughts and ideas throughout the next two days of the conference!

Megan Schopf (pictured), Founder of Artful Work, is an artist and facilitator who provided the conference with her experience working with groups and individuals creating visuals that support personal/professional development and deepen conversation. Throughout the conference, in both plenary and break-out sessions, Megan created visual learning tools which artistically captured what was being said. Megan has extensive experience in using graphics with people on an individual level, in large groups at conferences and small intimate dialogue groups

Elana Stanger, an innovative artist from the Bronx and owner of Diversity Arts, provided us with graphic notation and diversity art services at the conference. Stanger – or St. Anger – created artwork while observing sessions at the conference. Her artwork, which revolves around cartoons in which innocent-looking characters talk to one another about sensitive subjects, is designed to raise questions or awareness in the viewer, leading to greater individual clarity and insight, and intergroup understanding.
Support Us