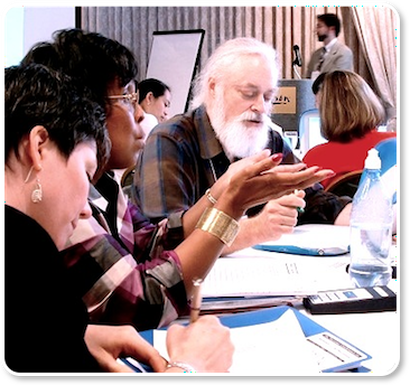 Cricket White of Hope in the Cities joined the conversation and quickly began drawing in other conference participants who she knew had taken the lead in various dialogue and deliberation efforts. Cricket’s enthusiasm was contagious, and a small group began seriously talking about how to make this idea a reality:
​Upon returning home, Sandy Heierbacher quickly set up a Yahoo discussion list for the group, and the list was immediately abuzz with ideas for an event which would bring dialogue and deliberation practitioners together to learn about each other’s models and strategies and to address the disconnect and lack of infrastructure that exists in this emerging community of practice.
​
The group also also reached out to others in their networks, and were soon joined by others who became actively involved in planning efforts:
The next step was to distribute a needs assessment survey taken by 115 D&D facilitators, organizers, researchers and activists. The results were both interesting and informative, and confirmed that D&D practitioners had a strong need – and many great ideas – for a national conference.

Soon after that, a grant proposal was written and presented to the William and Flora Hewlett Foundation (thanks to David Schoem mentioning our efforts to Terry Amsler at Hewlett). The grant was awarded from Hewlett on May 23, 2002, and the group moved into high gear planning for a conference in the Washington, D.C. area.

Sandy Heierbacher immediately sent out an announcement to about 2,500 contacts throughout the D&D community, hoping to not only encourage people to attend, but also to join the Organizing Team and Conference Coalition. Within days, the group received over 400 email messages from D&D leaders expressing their excitement about the event and the Organizing Team and the Coalition for a National Conference on Dialogue & Deliberation expanded.

The now expanded organizing team of 60 strong put together an event that included 56 top-notch workshops that exposed D&D practitioners to a plethora of techniques and tools and three plenary sessions that took conference participants through a dialogic and deliberative process to help them determine what actions we should take as a group to move our field forward.
​
​The 2002 conference was charged with energy, and the excitement of learning and sharing with fellow D&D practitioners and scholars energized participants and  planted the seeds for continuing community.
​
​Very soon after the conference, the 50 members of the Coalition for a National Conference on Dialogue & Deliberation decided to become the inaugural members of a National Coalition for Dialogue & Deliberation. The Coalition grew from 50 founding members to today’s more than 700 individual and organizational members.
​

NCDD would not be the vibrant network it is today without the efforts of our Co-Founders, Sandy Heierbacher and Andy Fluke. From the creation of this network, both worked tirelessly to keep people connected, engaged, and supported. From national conferences, to essential publications, this duo made NCDD into a leading organization in the dialogue, deliberation, and public engagement space. Read on for brief bios about our wonderful Co-Founders.

Sandy Heierbacher
Sandy co-founded NCDD in 2002 with Andy Fluke.  She has consulted for such organizations as the Corporation for National Service, Everyday Democracy and the Center for Disease Control in the areas of intergroup dialogue and public engagement.  Sandy has an M.A. in international management from SIT Graduate Institute. She currently serves as co-owner and Chief Operating Officer of a Boston cannabis company. Sandy can be contacted at sandyheierbacher [at] gmail [dot] com.

Andy Fluke
Andy is a writer, educator and consultant who launched NCDD with Sandy Heierbacher in 2002.  While serving as creative director from 2002 through 2015, Andy created & supported 4 generations of NCDD’s website and designed all of NCDD’s print material, including the 2010 Resource Guide on Public Engagement, our conference guidebooks, postcards & other promotional materials. Andy can be contacted at afluke [at] gmail [dot] com.
Support Us